2014 was a rough year for me. I remember that year as Vivere Pericoloso Ndlosor Ndlosor. I can’t revoke what was the great moment on that time. Getting married is not something I want to remember. However I will remember 2014 as a time I start Rumah Steril and met Goofy. I thought I have written a post about Goofy but when I tried to search I found zero result. Goofy is my friend and 1 year later Pippo came to accompany Goofy.

I never know where Goofy came from. I remember two years ago, I walked to Margo City through a quiet street behind Hotel Bumi Wiyata when I saw him. I could see he was confused and hungry at the same time. He tried to find food in garbage pile and seems uninteresting (finally, I find out Goofy is a picky eater just like me). I did not have skillful experience in taking care of dog. I only had 1 dog when I was a child and Blino was taken care by mother.

I was afraid on that time but I knew if I did not rescue him, lapo owner might take him. I called him and he came close to me. I tried to touch him, but he ran. So I walked slowly return to my place and calling him ‘anjing yuk ikut‘ (hey dog, follow me). I was clueless what should I call for a dog. Surprisingly, he followed me without any lace attached. He was arrived safely in my place without any problems made. When he was inside the terrace, I was confused what kind of food should I give. I decided to give him fish.

R and I decided to find his home. We believed he must run from his home and unable to return. 1 month of waiting, sharing information, and walking in UI area, we got nothing. I named him Goofy the day he arrived because it sounds cool: Goofy, guguknya Vivi. I am grateful that my neighbour allowed me to take care of Goofy. He is Muslim and Acehnese, fyi. He even asked me not to find the owner as he was excited Goofy is a nice security guard for his shop *Goofy used to bark to customers everytime they came too early to Sabri’s Shop and start making noise*

I remember 1 week after I found him, he refused to eat. It simply because he felt lonely as I went to Surabaya for 48 hours. I felt guilty on that time. Thank to Wisnu. He was the one who accompany Goofy for couple hours.

Sometimes Goofy sneaked out from the gate and run close enough to Lapo area, rarely Goofy bully the cats, but most of the time, he just sit next to me. After married and I was confident enough to take care another dog, we adopt Pippo. A little girl who left in Klinik Hewan Depok by her owner. It was an awesome idea, Goofy is more excited during his daily life. He has friend to play with. They go together every single time like twins. If I give foods, Pippo will wait until Goofy start to eat. Goofy always lick Pippo to make sure she is clean. I am glad Pippo can go along with Goofy.

Without Goofy, Pippo and the cats, I might end up in severe loneliness. I am grateful, I have them to take care of. They make me busy, stay alive, and believe nothing lasts forever in this world including loneliness. 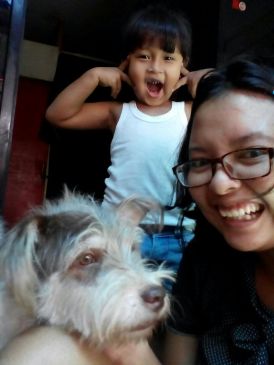 A passionate freelancer who does not consider herself an introvert. She loves to socialize (with people who even bore me), She loves the visits (in time-limited) from friends and family who come to catch up with her. She loves to entertain. But she also cherish her solitude. She does have good and close friends, but afterward feels a strong need to hide and recoup; She is a lively person but actually gasping for time to herself. She has good social skills but it doesn’t mean she wants to be around people all the time. View all posts by vivi